Kate Sullivan has just been appointed lead counsel in the trial that will set her career on fire. Mason Pharmaceutical’s (MPC) latest drug has deadly side effects and Kate is out to prove they knew about them but still put the drug on the market. Her clients are depending on her to win. MPC will try anything to stop this case from going to trial, so when a key witness ends up dead, Kate gets suspicious.

Former Army Ranger turned private investigator Landon James is hired to handle security for Kate, but he soon discovers he got more than he bargained for when she is threatened multiple times.

As the pair races against the clock to uncover the truths of this case, the danger rises along with their feelings for each other. Can they solve the mystery before it’s too late? 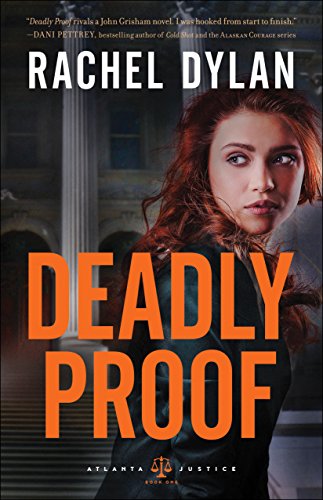 Deadly Proof had me from page one! I was hooked and couldn’t stop turning the pages to find out what would happen next. The plot had some surprising twists and kept me glued.

The female lead had me cheering her on. She was a force to be reckoned with even though the threats mounted up against her. She put the client first and wouldn’t back down. Go, Kate! The male lead melted my heart. He did everything to keep Kate safe even when he had to face his past mistakes. The characters in this book are strong and well written.

It’s clear the author knows in the inside of a courtroom. I was impressed with the amount of legal jargon. Enough to make it realistic but not bog you down. Well done!

The setting and imagery throughout were well written. You could picture the meeting rooms and the courtroom as if you were right there.

This is my first read by Rachel Dylan and it won’t be my last. I’m now a fan! I can’t wait for the next book in this Atlanta Justice series.

I give Deadly Proof 4.5 gavels. It’s one courtroom thriller you’ll want to pay attention to!

**Book has been provided courtesy of Baker Publishing Group and Graf-Martin Communications, Inc. in exchange for my honest review.

I would like to give away my copy of Deadly Proof. The contest rules are simple—leave a comment on the blog and you will be entered. Bonus entry– if you leave a comment AND share this post on Facebook you will get two entries (tag me on Facebook or let me know in the comments). Contest closes Saturday, October 21st at midnight. Enter now! (Open to residents of the USA and Canada only.)