The Patmos Deception by Davis Bunn

What would you do if you found yourself in a foreign country ready to start your dream job only to find all hopes of it shattered? Would you run home or try and make the best of it?

This is the situation Carey Mathers finds herself in when she travels to Greece to work at the prestigious Athens Institute for Antiquities. With chains wrapped around the gates locking her out, Carey’s dream job is gone. She takes refuge in a nearby restaurant and makes friends with a Greek woman her age also affected by Greece’s rough economy. She was sure God was leading her to Greece. What was He doing?

Nick Hennessy is struggling to find that one story that will put his journalism career on the road to success. He stumbles upon a lead in an antiquities smuggling ring that takes him to Greece and a childhood friend who could help him uncover and expose an ancient secret. The once scrawny girl is now a beautiful woman. Can he control the feelings threatening to surface? Or will he lose her to the mysterious Greek man? 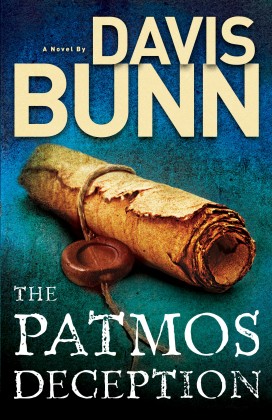 Dimitri Rubinos lived in Patmos all his life. All he has left is his dying father and grandmother. The family boat business was in jeopardy, so when an outsider offers him a chance to save it, he jumps at the opportunity. What will it cost him? And who is this beautiful American researcher who has turned his life upside down?

This trio encounters struggles separately and together in The Patmos Deception. It’s a cleverly woven tale by Davis Bunn filled with historical backgrounds of Greece and the Apostle John. Bunn is definitely a masterful author and good at creating strong characters. However, I have to admit this book disappointed me. It didn’t hold my interest. While I enjoyed the storyline, it took me about 100 pages to get fully into the story. It lacked both the action and romance I thought it would have.

Bunn sets it up in the end for a sequel, but I felt a bit cheated. I would have to give The Patmos Deception three out of five stars.

Will I read the sequel? Probably. I would like to see where he takes it (I won’t spoil the ending for you!).

I would like to give away my copy of The Patmos Deception. The contest rules are simple—leave a comment on the blog and you will be entered. Bonus entry– if you leave a comment AND share this post on Facebook you will get two entries (tag me on Facebook or let me know in the comments). Contest closes Saturday, Dec 13th at midnight. Enter now! (Open to residents of the USA and Canada only.)

Next week I will continue on with my favourite Christmas songs, but I wanted to leave you with another one by Pentatonix. This group is amazing. Wow!