I am a knight.

Ready to conquer any foe.

Do you feel unworthy and want to crawl in a hole and hide? Pretending to be something you’re not? You’re not alone.

In Chivalrous, Gwendolyn Barnes wants to be free of her father’s clutches and aspirations of marriage. Why can’t she just live her life the way she wants? She’s not ready to settle down to a man who will “tame” her, but she dreams of adventures. Her brothers are out fighting battles. Isn’t she worthy enough to do the same? Does it matter that she’s a woman? She prefers donning armor to pink flowing gowns. Any day.

Until she meets Allen of Ellsworth. The handsome stranger descended on Edendale and caught her eye with his captivating smile, catching her unaware.

Disguising herself as a knight, she enters the local jousting tournament in rebellion to her father’s wishes of marriage. She finds herself opposite Sir Allen. Will she be able to defend herself and keep her disguise in tact? 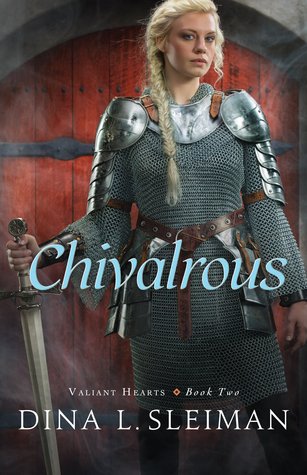 Allen of Ellsworth is ready to leave Lady Merry and the Ghosts of Farthingale Forest behind in hopes of one day becoming a knight. He’d served his purpose in the band of outlaws and Lord Linden was giving him a chance to prove himself in North Britannia by giving him a letter of recommendation. Why not take it? He sets off to find himself in a strange land.

What he discovers is something surprising—a tall blonde with a puzzling but spirited personality.

Gwen and Allen soon find themselves wrapped up in a devious plot to overthrow the kingdom while her father tries to lock her into a loveless marriage to a brute. Can they find their own identities and save the land at the same time?

Chivalrous is book two in Dina L. Sleiman’s Valiant Heart series. I loved Dauntless (see my review here), but I gotta say . . . this one is even better! Ms. Sleiman has stepped up her game (jousting perhaps?!) and given us an Arthurian-inspired medieval story filled with believable characters and a plot packed with twists you won’t see coming.

It’s well-written and filled with vivid imagery, putting you in the middle of the Camelot-like kingdom. I found myself cheering Gwennie and Allen on while wanting to clash my sword with the brute Gawain! This delightful tale will keep you turning the pages until you reach the end.

I give Chivalrous five lances!

It’s one jousting tournament you will want to keep your eyes fixated on. You don’t want to miss a thing!

**I received a complimentary e-copy of this book from Baker Publishing Group in exchange for my honest review.

Chivalrous is launching in September. You can pre-order it here now! Don’t miss out.

← From My Playlist - Voices From the Other Side Why? - Coffee With Eve →