Pastor John Cross wants to leave his former CIA job in the past forever, but once again he’s thrust into a terrorist plot and his girlfriend is right in the middle of it. He has to risk their relationship in order to keep her alive.

Reporter Christine Lewis is out to clear her step-brother’s name of murder charges, but what she uncovers is a web of conspiracy. She’s soon targeted and is on the run for her life.

John and Christine must work together along with other agencies to uncover the plot before the terrorist can set it in motion, but can their relationship survive and who can they trust? 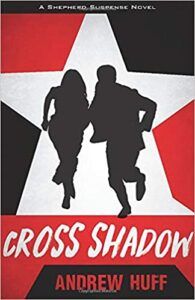 Cross Shadow is book two of Andrew Huff’s Shepherd Suspense series and wow—it will keep you on the edge of your seat just like an episode of 24! John Cross will remind the reader of Jack Bauer as the character goes through non-stop action.

The tension and conflict in this story were well placed. Just when you think they were safe, something else happens. This puts the reader right into the story, holding their breath. The author’s use of sensory is done effectively. It brings the words on the page to life.

This is book two of the Shepherd Suspense trilogy. I can’t wait for book three—Right Cross—coming in January 2021.

I give Cross Shadow five stars. The story will keep the reader guessing with every twist and turn and shock them with the stunning ending.

**Book has been provided courtesy of Kregel Publications in exchange for my honest review. All opinions are my own.